While pursuing a hypothesis in cancer metabolism, we identified the function of an enzyme called ISPD. Following the evidence, this work led us to discover the existence of ribitolphosphorylation as novel post-translational modification of the protein a-dystroglycan. Part of the lab is attempting to learn more about the biogenesis and physiological role of this enigmatic modification 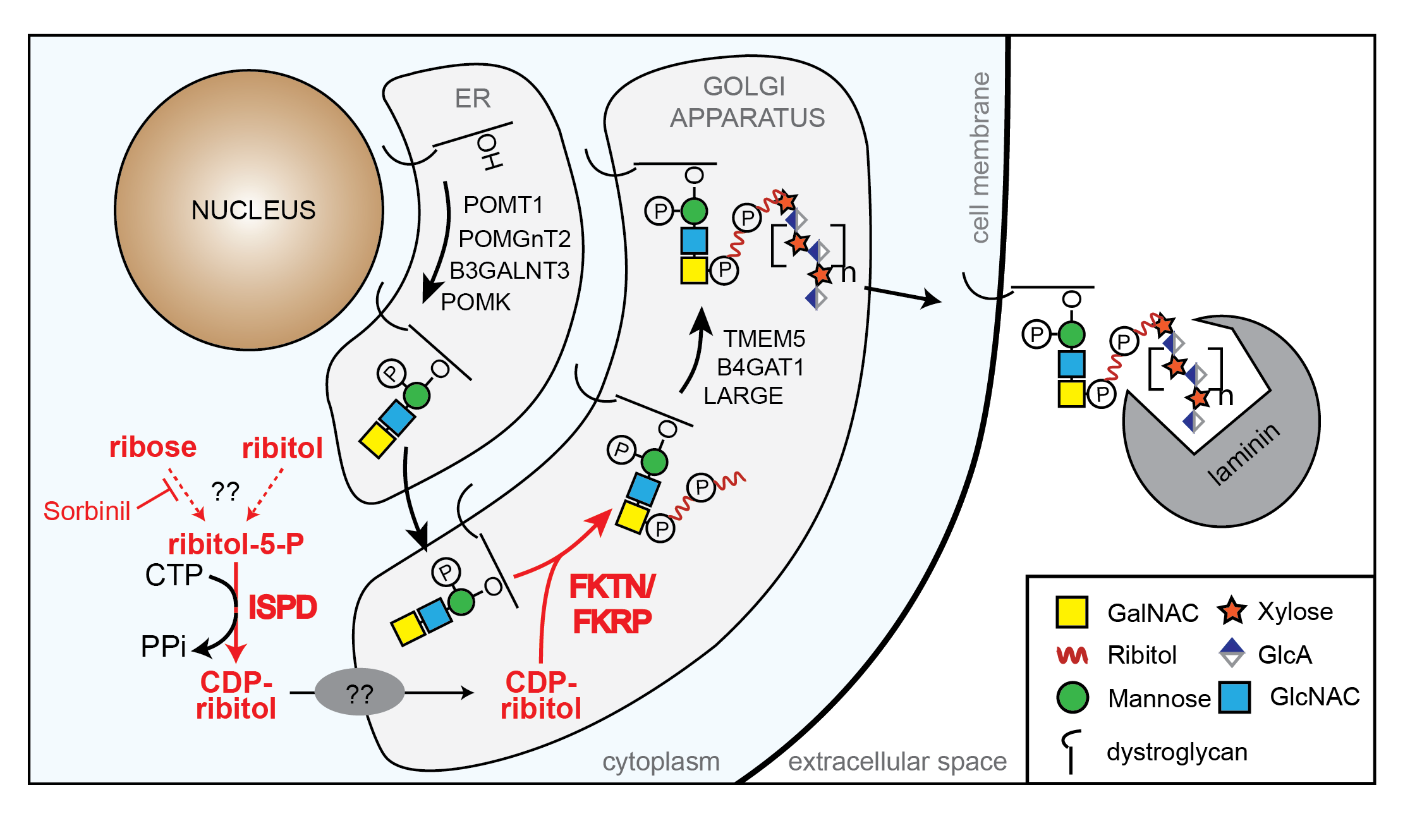 For quite some time, it was well established that formation of this glycan starts in the endoplasmic reticulum by a very unusual type of O-glycosylation, where the enzyme POMT1 adds mannose to serine or threonine residues (O-mannosylation) followed by a series of additional modification (Fig. 1)(5). It was also well-documented that the terminal modification of a-dystroglycan consisted of many repeats of the disaccharide xylose and glucuronic acid (attached by the enzyme LARGE)(8). In contrast, the intermediate steps were unknown until very recently. Within the last year, the lab of Guido Bommer and others have unraveled that two consecutive ribitolphosphate groups represent the missing link (9-12). The activities of ISPD, FKTN and FKRP turned out to be required to incorporate this modification, and the genes encoding all three of them had previously been found mutated in dystroglycanopathies. Specifically, ISPD synthesizes an activated form of ribitol-phosphate (i.e. CDP-ribitol) in the cytosol, and FKTN and FKRP can use CDP-ribitol to transfer ribitolphosphate groups onto a-dystroglycan in the Golgi apparatus. The transfer of two consecutive ribitolphosphate groups is required before LARGE can add a terminal modification, which is mediating the interaction of a-dystroglycan with its ligands (8). Of note, these findings might open avenues for the development of novel therapeutic approaches for dystroglycanopathies. For example, we have found that supplementation of ribitol (i.e. a biochemical precursor of ribitolphosphate) can restore a-dystroglycan glycosylation in cell lines obtained from some patients with ISPD mutations. Currently, we are trying to find the missing steps that are required for the biogenesis of ribitolphosphate modifications.

The presence of ribitolphosphate groups in a-dystroglycan came as a surprise. Such groups are well-known in bacterial capsules and cell wall teichoic acids (13-15), but had never been described in eukaryotes. In comparison to the rigid circular form of sugars in glycans, ribitolphosphate groups are quite flexible. This property might be important for a-dystroglycan, but might also be useful in other proteins.

The incorporation of ribitolphosphate into a-dystroglycan requires the enzymes ISPD, FKTN and FKRP. In addition, so-far unknown enzymes are required for the synthesis of ribitol-5-phosphate (which has no other known function in mammalian metabolism)(9), and a transporter is needed to transport CDP-ribitol from the cytoplasm into the Golgi apparatus. This complex system might seem to be a quite steep price to pay to modify only a single protein (i.e. a-dystroglycan). This raises the question whether other proteins might also carry ribitolphosphate groups and need them for their function.

In fact, the situation is a bit reminiscent to the situation of O-mannosylation, which was originally, believed to occur only in very few proteins (including a-dystroglycan) (5). However, recent studies have revealed that this modification is present in more than 50 proteins (16, 17).

Currrently, we are trying to determine whether proteins other than a-dystroglycan also contain ribitolphosphate groups.